A Body in Barcelona by Jason Webster 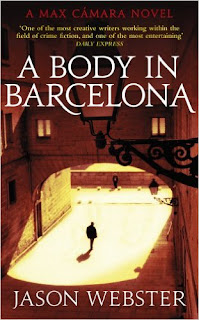 Based in Barcelona, and Valencia, this murder mystery is set against a background of politics as the people of Catalonia hope for independence, in contrast to the many Spanish who (according to the book) do not want the country to be divided.    It is set in the current day, with the recession biting and tensions rising.

The first half of the book clarifies the politics, the policing and why Camara (the police officer) is thinking and acting as he does.  Very interesting for those who want to learn something about the question of the independence of Catalonia.  However, it is not until Chapter 8 that a body is found and not until the middle of the book that the action really gets going, and it becomes a thrilling read.  The description of the farming life around Valencia is wonderful, and other areas explored include the various police and intelligence agencies, paella making, the Legión,  government agricultural grants, social problems and anarchists.

There are numerous strands to the plot, which makes the book seem to jump around in the first half, but gradually they all come together, as the book races through a thrilling second half.  Camara is an interesting character, needing to decide between upholding his moral values or letting them go in order to assist in solving a case in which he has no leads.

For the tourist a few places of interest in Barcelona are mentioned, including a wonderful (according to the book) fish restaurant that still exists.  However the main interest for tourists will be the political background that is described.

This is the first book in the Camara series that I have read (this is the 5th novel), and I found it difficult to get through the first half - interesting as it was (too much politics, too little action).  However once all the explanations had been completed and I had reached the second half, it was brilliant and difficult to put down.  I'm glad I kept reading.