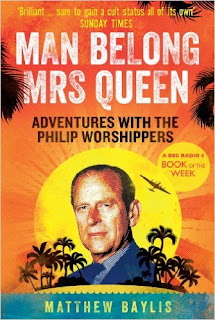 Set on Tanna, an island in the South Pacific, this fascinating book is an exploration of what it is like to visit, and stay with, people whose culture, customs and way of life are so very different to one's own experiences.

When Matthew Baylis (the author) was 11 years old he was fascinated by Prince Philip who visited his home town of Manchester at that time.  Adolescence interrupted this "Duke worship" until a BBC film shown at his University re-ignited it which resulted in him visiting Tanna to learn more about the inhabitants  who worship Prince Philip.

Baylis' lack of knowledge of customs, the local language (he learnt the wrong one before he set out) and local views on polite behaviour lead to some  hilarious mistakes being made.   For example on a cold wet day Baylis remarks that he has brought the English weather with him, resulting in the Chief being mightily impressed with Baylis' powers of magic, and then there is the Chief's friendship with Ken Dodd - really??  These stories are intertwined with fascinating insights into the history of the islands and the incursions onto it by Europeans, and some delightful anecdotes about Prince Philip himself.

Baylis risks much to learn about these people but presents his story in a witty and light hearted way, only giving hints about how hair raising it was at times.  He always remains respectful whilst describing the people of the island and their belief systems, and even hardly has a bad word to say about the endless conversations about yams, and the unfortunate effect that the eating of so many has on his digestive system.

Trying to ascertain the beginnings of the Prince Philip worship proves difficult, perhaps not helped by the frequent drinking of the local root based narcotic, and the culture that everything stops (seemingly quite often) for a party.   Baylis appears to have had little interaction with the women of the island, so there is little mention of their customs and ways.

There is a useful glossary of words at the back of the book, and a list of further reading on many of the subjects included - such as Cargo Cults and the John Frum cult.

I thoroughly enjoyed this book, an armchair insight into an island I shall almost definitely never visit, and a way of life very different to my own.  Most of the book is written in a light, easy to read fashion, however there were a few moments where I lost interest, but these were quickly got through, and perhaps are inevitable when someone is trying to find out the secrets of a people who may not be so keen to give the information away.    After enjoying  Baylis' tales of his stay on the island, I was particularly pleased to find he had ended the book with his own thoughts on why  Philippism had come about, and the positive outcomes of such a cult.  And then there is a final laugh in the last paragraph of the book.

A great book to give (or receive) as a gift.
Posted by EmmabBooks at 17:31