The Silent Hours by Cesca Major 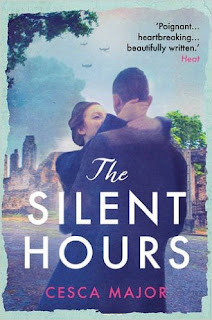 This moving book follows 5 main characters living in a small French village that is unoccupied by the Nazis.  The story starts when war in France is declared, and takes the reader up to near the end of the war - when a true event takes place.

The story is told in short chapters from each of the main character's viewpoints.    This form of narration works well and does not disrupt the flow of the story at all.  The main characters are:
Adeline, who does not speak and is residing in a convent, who talks of the present (1952) and the past.
Isabelle, Adeline's adored teenage daughter
Paul, Adeline's son who goes off to fight in the war
Sebastien, the son of a Jewish banker
Tristan, a 9 year old boy whose family moves from Paris to the village to escape the war.

The narrative steadily builds a story of village life, including romance, prejudice, childish innocence, war and different perspectives.  The reader is gradually pulled into the characters' lives - it is like a puzzle being gradually filled in, with the reader becoming mesmerised as the picture become ever more complete.

This story is fiction, but based around a real event that took place on 10 June 1944.  The village, Oradour-sur-Glane, where the action takes place,  is a real place (now a permanent memorial and museum). I strongly recommend that you do not look up the event until you have finished the book.  All the characters are fictional, but I imagine their lives are typical of those that would have been taking place in this village at that time - the author is a historian.  Hopes and fears, loves and disappointments are drawn well - as the characters come to life and struggle in these times of hardship and restrictions.

For me the story from Tristan's 9 year old point of view was particularly strong - having the full facts withheld from him, he imagines scenarios with himself as the hero who brings an end to the war.  However his innocent imaginings and actions have far reaching outcomes in the real world.

The book flowed well, and kept me gripped.  It gave me a very powerful image of what a village such as this would have been like at that time, with all the serious worries and fears of war, and the petty arguments etc that continue in any small community.   There is a useful "Historical Note" at the end, which clarifies how much of the book is fiction and how much based on real life events.

I highly recommend this book to anyone who is interested in French village life during WWII, or just wants a great engaging read.

It is suitable for all the family.