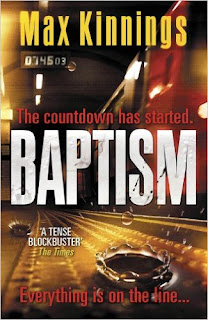 A dramatic start to this thriller, followed by the murder of a monk in Snowdonia which  leads to 16 hours of fast moving action.

For George it is just another ordinary, albeit hot, start to a day.  All his life he has felt a failure, his dreams have come to nothing, and life, apart from his wife and children, has been a bit of a mundane disappointment to him.  However today will be different, but he has no idea of this as he commences his day as an underground driver and leaves Morden station.

Tommy, unlike George, is on a high.  Today, guided by God (he believes), is the day to make a difference.  He, along with his sister, will perform a great deed.

Ed Mallory, Special Branch, has the role of trying to stop the deaths of over 300 people stuck on an underground train somewhere between Leicester Square and Tottenham Court Road.  But can he make the right decisions to satisfy the police, the government, the military, those stuck in the tunnel and their families?

This is a fast moving book, with short chapters, and action all the time (not just cliff hangers).  There is quite a bit of violence, but this is in keeping with the story, and not overly gory.  Each chapter is headed by the time of day, and, apart from the first chapter/prologue, moves in chronological order.   I can't say anything more about the story, for fear of giving any of the plot away.

Most of the action takes place on the underground in London, which is depicted well.  I would be surprised if anyone using the underground shortly after reading this book, is not unnerved by it.  I just hope your underground train does not stop between Leicester Sq. and Tottenham Court Rd!     Action takes place in Snowdonia at the beginning of the book, but gives almost no information about the area for visitors.

I was riveted to this book from page one, right to the end.  It is  great to read a book where the action continues right to the penultimate page, no long winded explanations to the reader by a detective here!  I loved the fast paced action, and having commuted on the London Underground for many years was right there with those people in the tunnel.

I thoroughly recommend this book if  you enjoy a true thriller, and are ok with the views of a religious psychopath!