The War Came Home With Him by Catherine Madison 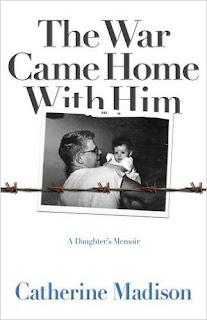 This is the story of Doc, a Korean War survivor; how he survived the War (and being a POW) and family life during his absence and on his return.  It is also the story of his daughter Cathy, the author. Useful background information for readers unfamiliar with the Korean War is given as part of the narrative.

The book starts in the 1950s and continues up to 2002.  Chapters alternate between the father's story in Korea and the daughter's story growing up, mainly in the US, with her returned father's authoritarian parenting style.  The changes between timelines are smooth and work well - there are no sudden break offs, or cliff hangers at the end of chapters.   There are only 3 main characters, Cathy and her parents.  Other family members, friends and POW survivors and non-survivors play a peripheral, albeit essential, role in the book.

Themes that stood out for me included  the chaos of war (from the soldier's perspective), the importance of friends, how a positive outlook at times of unimaginable suffering really does make a difference, and of course an insight into the Korean War.   Also, of course, how to survive growing up with an overly strict, and often frightening, father.

What really drew me to this book, was the author's writing style.  She uses brevity to give the information pertinent to the action, but does not embellish it.  There are moments of total awfulness in some of the Korean scenes, and moments of wit - such as when Cathy has to clear her plate of unwanted asparagus "Chewed until I couldn't chew anymore, then swallowed.  ... When it wouldn't go down, its friends came back up."  Few emotions are described as the writing is so clear that the reader knows how the person is feeling.

I found this book totally gripping.  I empathised with Cathy trying to cope with her parents, enjoyed the scenes of her growing up, felt sad at the struggles her father was obviously going through, and was shocked at many of the Korean scenes.  However, despite all,  this is a positive book - and quite possibly the best book I have read so far this year!