You Think You Know Me by Clare Chase

My rating:  5 out of 5
A great thriller that starts gently, builds up and then stampedes to an exciting end. 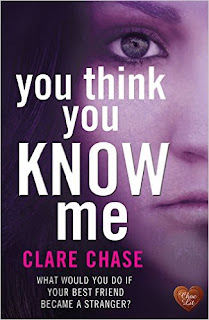 Based in London Anna attends an Art Gallery launch party one evening, and meets an attractive man.   However it appears he is acting oddly and Anna is warned to stay away from him  - but she can't quite leave him alone.  And that's only Chapter 1! As Anna says much later on "He seemed like a nice man", but is he who he seems to be?     As the story progresses Anna has to decide should she listen to her long time friend from University or to the man of her dreams that she has just only just met.  Naturally it's not as simple as that, as the author weaves her modern day thriller.

This is a book that draws you in, and keeps you reading just a little bit more than you had intended to each session.  Anna 's character is well drawn, helped by her chats with her house mates (bit like "Sex in the City" minus the sex and based in London) and I felt really involved in her dilemmas.     There were many instances I wondered what I would have done in her situation - until well into the book when I would have fled the scene very fast (Anna fortunately has more bravado than me).   The mystery builds with each chapter, with lots of twists and unexpected turns, and many cliff hanger chapter endings.  This is a book that you won't want to put down.

The story is based in the art world, so gives brief glimpses into that; whilst mostly set in London there are occasional forays out into the Lake District.

I loved it, and would recommend this book to anyone looking for a gripping thriller.