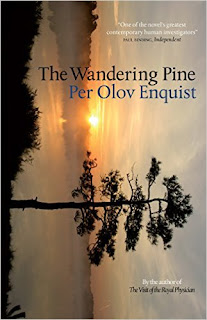 Posted by EmmabBooks at 12:48 No comments:

House of Ashes by Monique Roffey 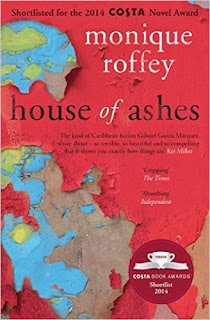 Loosely based on the attempted coup d'etat  in Trinidad in 1990, the action in this fast moving story takes place on a fictitious island in the Caribbean.   However, as the author says, the action has much in common with attempted coups in other parts of the world, and (in my opinion) gives an insight into much of the unrest that is taking place all over the world today.

The story starts as seen through the eyes of Ashes, a quiet studious family man.  Ashes thinks that his religious "Leader" has many of the answers that he is seeking in life, so says "yes" when asked to participate in the coup, not quite understanding what he is agreeing to, but following his charismatic leader.   Then one afternoon Ashes turns up to prayers,  and by the time he leaves his life has changed for  ever.

As events unfold, not quite as the revolutionaries imagine, the action shifts  to the House of Power - and the narrative moves between Ashes and Mrs Garland, Minister for the Environment, one of the hostages.

The fears, emotions and doubts experienced by hostages and captors are portrayed expressively, and the action rises and falls according to what is going on inside the House, and what can be observed of the outside through the windows - at one stage Kate Adie is seen, so you know things are bad!
At the end of the book the story is rounded off well.

I found this a fascinating and gripping book.   The perspective of Mrs Garland (hostage) was very thought provoking, and some of the conversations she has with the revolutionaries made me compare these fictional events to current world affairs.   Her discussions about the realities of government, compared to the version fed to the young gunmen, and her thoughts as to what the future of these young impressionable men should be once the current events have run their course, are very thought provoking.

Some of the characters appeared so seldom in the book, that I needed, on a few occasions,  to flick back to check who they were, but that may say more about my memory for names than anything else!  The author uses words peculiar to Trinidad in her writing, and it is a pity that these are not translated at the back of the book.  However a quick internet search brings up definitions.


For me this is a book that I will be thinking about for some time to come, and has certainly given me a new perspective on world events.

Posted by EmmabBooks at 17:38 No comments:

I am Nujood, Age 10 and Divorced by Nujood Ali

A fascinating, and harrowing, insight into the life of girls, and women, in Yemen.
My rating:   5/5 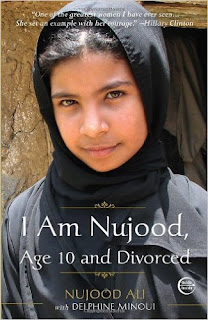 A fascinating, and harrowing, insight into the life of girls, and women, in Yemen. Nujood packs this short book full of detail – including a brief description of the politics and background of the country, which puts her story into context.
This brave girl risked so much to escape from the clutches of her forced marriage, and defy the customs of Yemen. Her story is inspiring.
If you do not know Nujood’s story, I recommend you read her book before looking her up on the internet, so that you can follow the events as they unfold without pre-knowledge.
Posted by EmmabBooks at 17:36 No comments: